SPEEDY DELIVERY CHECK OUT OUR REVIEWS

Our very own Mrs Lambert has recently returned from a visit to the Peak District where she was supposed to be resting, but couldn’t resist a peep at the National Stone Centre near Wirksworth.

As you may already have gathered, my interest in landscaping veers very much towards the planting, soil science and ecology side of things. And whilst I can appreciate a well made deck or a beautiful piece of stonework. It’s flowers and bees that really attract me. However, in the interest of being able to write balanced content for the Arbour Landscape Solutions website. And with materials shortages looming on the horizon, I took a break from relaxing on holiday to learn more about UK stone.  And Wow! Was I glad I did! 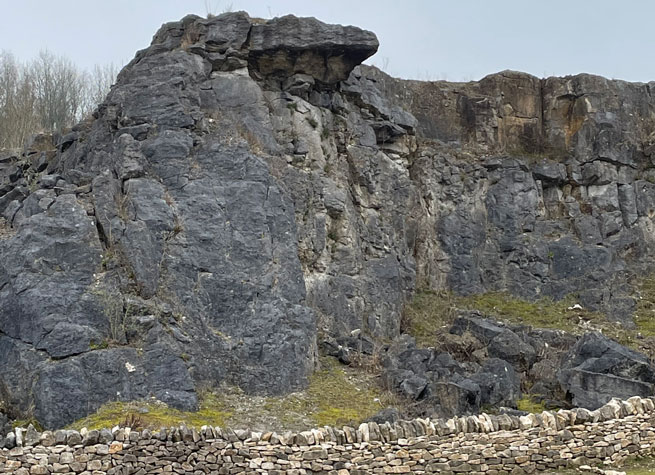 Believe it or not, this rock formation in the middle of England was once a coral reef in a balmy blue lagoon. 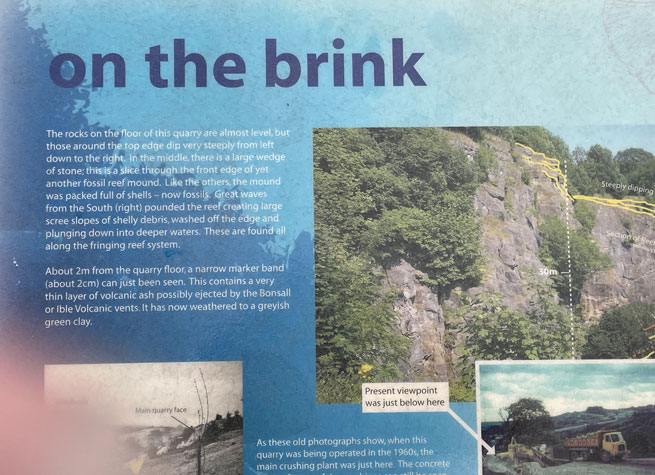 One of the interpretation boards at the National Stone Centre

About The National Stone Centre

The National Stone Centre sits on the site of an old quarry just outside of the town of Wirksworth in Derbyshire.  It’s well signposted and my sat nav took me direct to the door……which is more than I can say for it when I was trying to find my holiday cottage!  I was pleased to discover that car parking was only £1 and that the same car park gave Patsy dog and I access to the High Peaks Trail which meant I could get my 10,000 steps in without moving to another car park.

Before I left for my holiday, I was discussing my plans with a friend and we both had visions of The National Stone Centre being a remote portacabin containing a couple of mannequins and some leaflets. (We’ve all been to places like that!) However, that was certainly not the case.  The visitor centre is smart and comfortable and has a superb, dog friendly cafe. Which for me, was an excellent start to the visit.

There’s also a really good display showing you how rocks are formed and what they look like under a microscope. If the grandchildren were with me, they would have been fascinated.  Unfortunately Patsy dog was rather keen to get outside and so I wasn’t able to digest as much information as I would have liked.  I was however, inspired to do some online research and learn more for myself.

The centre is run by volunteers who are extremely knowledgable.  They don’t hassle you in the least, but they can answer any questions you have and will also paint a picture of what the quarry was like when it was in active use.

What Will You See On A Visit?

Following the centre’s aptly named “Geo Trail” was amazing.  All too often we don’t see what’s in front of us and certainly, whilst I had been admiring the overall landscape in the area, I certainly hadn’t been thinking about the actual contents of the rocks or how they were formed. …Possibly because I was distracted by the wildflowers, woodlands and sheep - oops!

Did you know for example that what we know as a very hilly area in the middle of chilly England, was once a tropical island surrounded by warm, water.  The National Stone Centre sits right on top of what was  a reef between a warm, shallow lagoon and the deep ocean beyond.  Which is why limestone quarried from this area often contains fossils.

Imagine how much more attractive UK sourced stone pavers would sound to a client if you could explain their story and point out some of the incredible features!

At various points during the geo trail you are encouraged to stop and look for fossils embedded in the quarry walls - it’s a brilliant activity for children of all ages!

In some limestone pavers, you can clearly see natural veining that forms fascinating patterns.  These were formed when earth movements created cracks in the layers of stone. The cracks were later filled with mineral rich fluids which solidified to not only create patterns, but to create substances that in recent history proved to be very useful to human beings.  Things like galena (lead sulphide) which can be processed to extract the lead that is used in a great many industrial processes.  Lead mining was the trigger for building railways and canals in the area and the volunteers in the centre were kind enough to take the time to tell me how the High Peak Trail was once a railway taking lead ore from the quarry to the canals and then on to Manchester.

So the beautiful veining you see in natural stone has been there for around 300 million years and was once crucial to  the UK economy and to the development of our infrastructure. 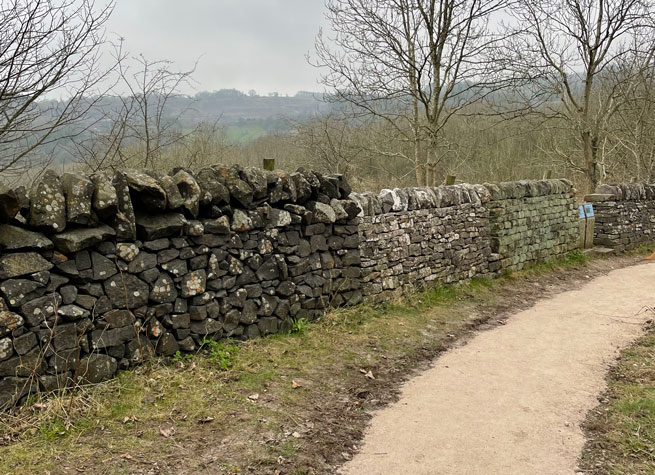 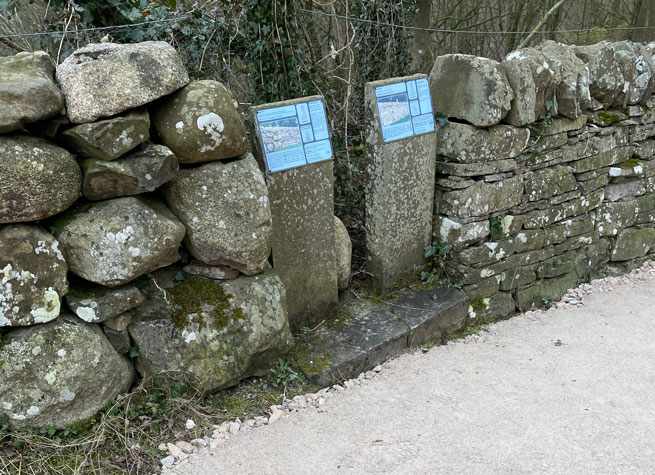 What an incredible contrast in textures

The one part of the National Stone Centre that engaged me more than any other was the Millennium Wall.  You won’t be surprised to learn that it was built in the year 2000, but you might be intrigued to learn that it’s built in sections. Each one reflecting a different dry stone walling style from the UK.  I didn’t even realise there were different dry stone walling techniques!  What an incredible feature and one that I suspect will be fascinating to all of the garden designers out there.  My favourite was the style of dry stone walling, which looks a bit like gravestones all in a row.  It would look amazing in a wild garden with digitalis and grasses growing beside it.

If you’re interested in dry stone walling, the dry stone wall association have written a book about the Millennium Wall. It's called "Dry Stone Walls, The National Collection" and is ridiculously cheap at only £5.50 and so I’ve ordered myself a copy from here.  https://www.dswa.org.uk/books-dvds/ 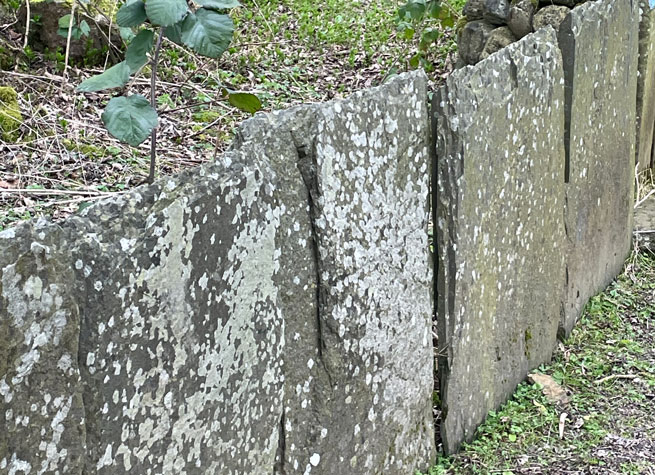 Honestly, if you ever find yourself anywhere near the Peak District, it’s well worth popping into the the National Stone Centre.  I thoroughly enjoyed my visit - which is really saying something because much as I admire the skills that go into creating the hard landscaping part of any garden design - I still like plants the best!

The National Stone Centre website is here……https://www.nationalstonecentre.org.uk  I believe that they do host group visits if you ask them to - perhaps take your APL Cluster Group or arrange to hold your SGD meeting there.  The more you can learn about the products you are specifying and installing - the more fulfilling your work will be.

Create the dry stone wall effect in your own projects with paddlestones or split face stone cladding from Arbour Landscape Solutions.

Contact Us to discuss bespoke, UK sourced stone for your next project.

If you haven't got an account, please click here to register.  Once your account has been approved, you will be sent a confirmation email, please check your spam/junk folders just in case.

Browse our extensive range of products using the 'Catagory Drop Downs Menu' option or use the search box at the top of the website.

Select the product you want to buy and chose from the various size/options if relevant.

From the product page, you can either click 'Buy Now' to add the item to your basket, or click 'Add to Quote'.  'Add to Quote' allows you to either create a new quote that is stored within your account, or you can add to an existing quote that you have already created.  Quotes can then be viewed within your account and can be added to or edited until such time that you wish to convert the quote into an order. They are valid for 30 days.

You can also order samples by clicking here.

Converting a quote to an order will add all of the items to your basket where you can proceed through the checkout to make your purchase.

Would you like to remove the items in your basket and replace them with this order or keep all items in the basket?